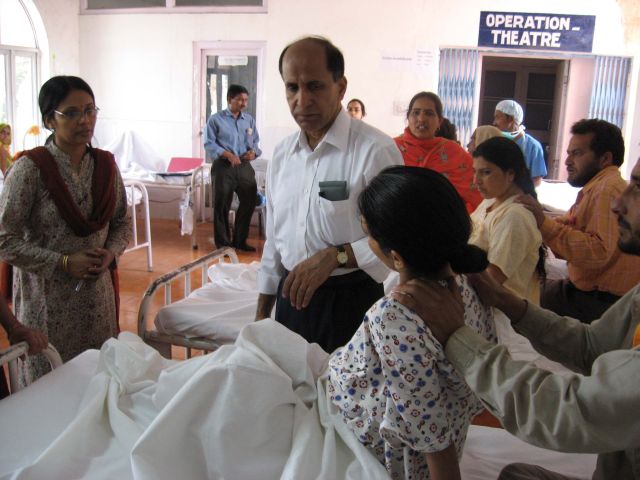 Arrival at Nougran : Setting up the Camp

The SOSMT team consisting of doctors, nurses, paramedical personnel and volunteers reached Jammu by train and therefrom Nougran by transport provided by the health department of Jammu, early in the morning of November 29, 2015. Dr Bhanot, Miss Radhika and Miss Aishwariya reached by direct flight from Delhi. The camp activities were started soon after arrival. The OPD work was started on the same day while the operation theatre was got ready for the next day, i.e., Monday.

Highlights of the Camp

This camp turned out to be different in several ways from the earlier camps. There were many firsts in this camp. Some of these are as under:
• Two surgeons from Latvia, a general/laparoscopic surgeon and an orthopaedic surgeon,
participated in the camp;
• There were three participants from the UK;
• Endo-urology was introduced in the camp for the first time;
• Two orthopaedic surgeons, Dr Deepak Raina and Dr Surbhit Rastogi, from the Indian Spinal
Injuries Centre in Delhi visited the camp and participated in the OPD and operative work
for three days during the camp;
• Two medical students (one from Delhi and the other from UK), both in their final years,
also participated in the camp; this we consider as a good beginning.

The next camp is likely to be held in Punjab in the Phagwara town or one of its adjacent locations. The dates for the camp are March 28, 2016 to April 3, 2016 (Monday to Sunday).